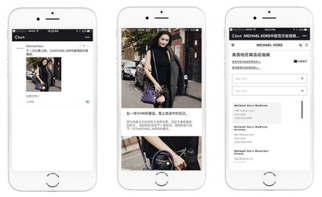 “We were excited to partner with Tencent’s International Business Group and Social Ads team on this tourist-centric opportunity to better connect with our Chinese consumer. We are always looking to put our customer first and meet her on the platforms she is using every day with a message that is relevant to her, and WeChat offered a unique way to do just that.” - Michael Kors Marketing

Michael Kors partnered with Tencent as one of the first advertisers to leverage WeChat’s advanced tourist targeting capabilities for Golden Week 2017 and Lunar New Year 2018.
Knowing that for traveling Chinese customers, 80% of the consumer decision journey occurs while they are still in Mainland China, Kors knew it was important to reach this high-potential audience before they reached their North American destinations.
In the months preceding Golden Week in September and Lunar New Year in February, Michael Kors ran a series of ads featuring well-known Chinese actress, and Michael Kors Global Brand Ambassador, Yang Mi. The ads were targeted to users likely to be traveling to the US and Canada, using a powerful combination of demographic, environmental, keyword, behavioral, and interest- based targeting unique to the Tencent ecosystem.
The brand then followed up with a second series of ads targeted to Chinese tourists during their vacations in the US and Canada, directing them to nearby Michael Kors stores. 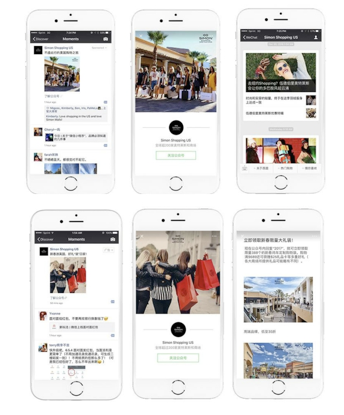 Simon Malls, the largest owner of shopping malls in the United States with 200+ shopping destinations, placed a series of campaigns with the specific goal to reach Chinese travelers.

The ads placed utilized Tencent special targeting, reaching users who were most likely to travel to the USA and have previously traveled to the USA with shopping interest.

Cost per follower was 32 – 52% lower than industry standard 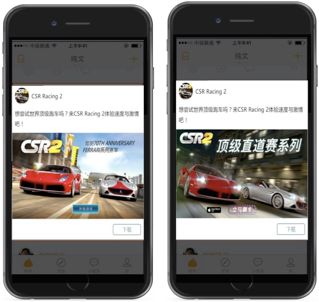